Story time.
Back in July of last year, I've been playing private servers with my friends and we came across a server which was the inspiration for Windia. Its name was Elation.
It had a good amount of features which my friends and I liked although weren't exactly fine-tuned but the concepts were awesome. The server wasn't really stable and we got tired of it so we quit.
My friends asked me "you can dev, why not work on your own server?" and I felt motivation, then Windia was born.
Fun fact: the name I initially had planned for Windia was actually Grandis, and the initial development was for v84 (rather than v83) but it was dropped due to lack of demand back then.

Then the development of the current game server which you know as Windia started, on August 11. 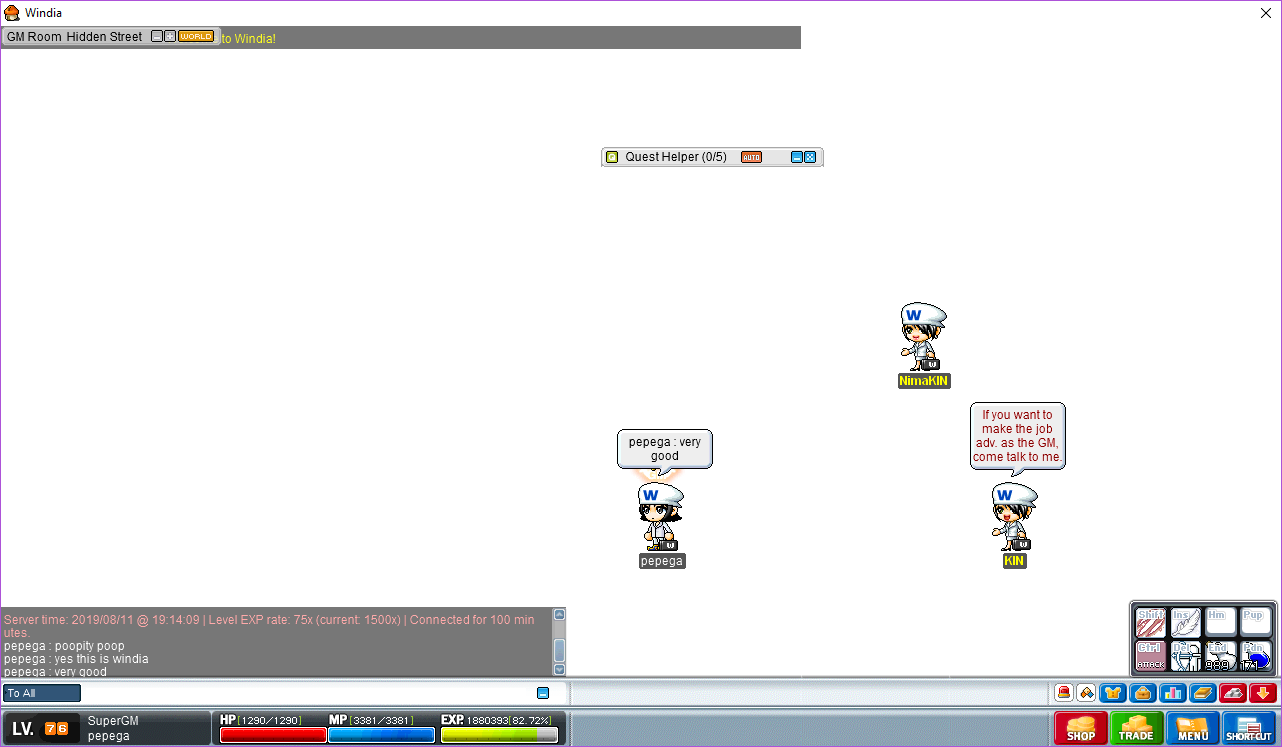 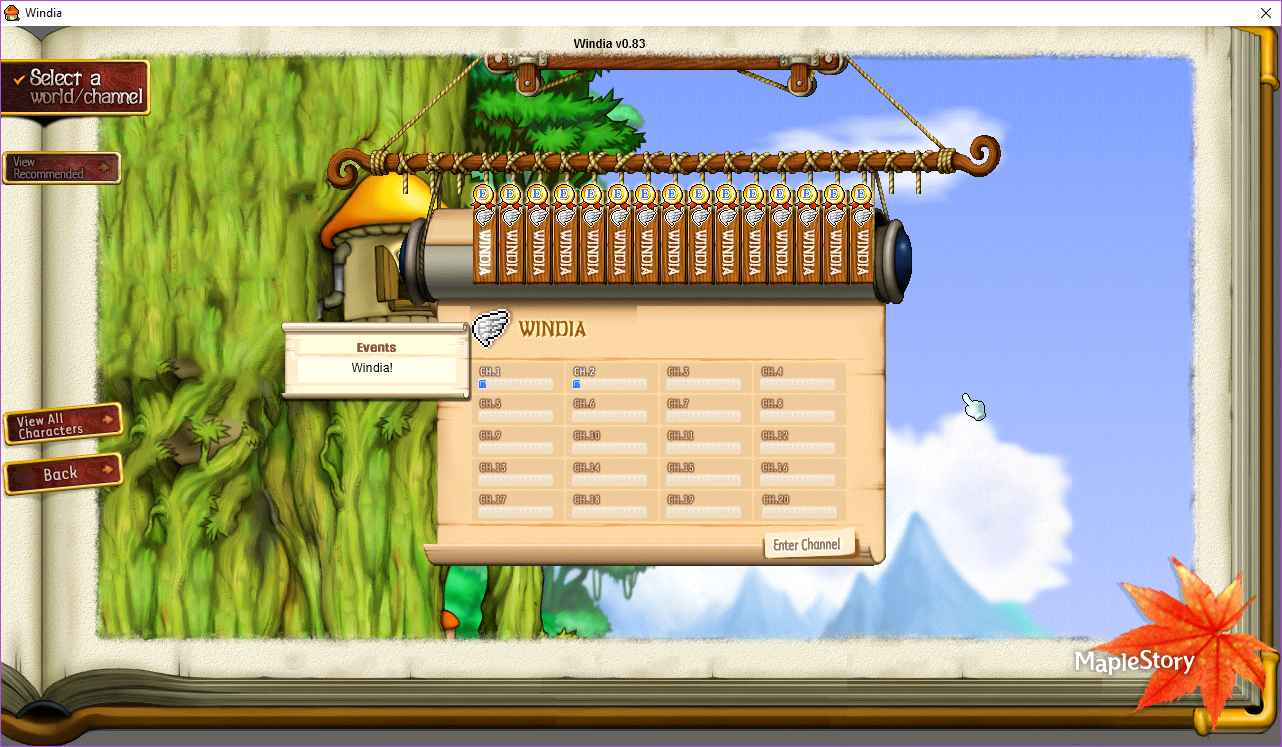 The server was in closed testing for myself only, and then the closed beta begun on the 17th. If I recall correctly, I was averaging 14 hours of development per day until then.
The closed beta went very smoothly, a lot smoother than I had ever expected. All of the testers reported every bug they found as well as multiple balancing concerns. Every single reported issue was resolved within less than 12 hours after the report.
Fast forward to the 23th. Windia's open beta starts with 10 online users after the first hour.. didn't really expect much.
A lot of issues were resolved during the open beta. Several dupes were fixed, lots of server optimizations, some systems were changed, balancing changes, server stability was improved.
The "big namers" of the open-beta unfortunately stopped playing after the beta phase was over but they've been huge help during that.
The 30th, we launched. The server reached 45 users online almost 5 minutes after launching.
We had 23 hours of uptime with no stability issues but I had to stop due to some critical bugs which weren't noticed during the beta testing phases, which is perfectly fine.. and that's the Windia you know and love!


"So, shavit, what about the update you promised?"
I need to provide some transparency on the matter.
As I mentioned earlier, I spent a ridiculous amount of time on solo development of Windia and around April I pretty much burned out, although have recovered from it.
When the update was planned months ago, I tried outsourcing some of the data work (well, WZ changes) from people in the community who are known to be experienced with it.
The first attempt of outsourcing the work was with the person who helped with the imports of Veracent.
Unfortunately they weren't really comfortable with work beyond mapping so I couldn't get them to help, didn't work out.
The second attempt of outsourcing was asking a friend who started doing the job but they pretty much disappeared and hasn't replied to me.
No, I didn't pay for anything - I didn't get scammed and I hope that's crystal clear.
The third attempt was similar but they started working on reworking the login screens which unfortunately wasn't a finished job either.
The fourth and last attempt was with a known figure in the private server community but sadly he didn't pull through which is understandable because he runs his own private server as well, can't expect a whole lot.
So I started doing it myself instead of attempting to outsource the job after 2 months of failure trying to work with people.
A few weeks ago I was already into it and already managed to get a decent amount of updating/changes done but then an unfortunate event happened and I wasn't able to use internet connection on my computer.
I didn't ever account for such an incident so I was unable to work on Windia until my connection was restored. 10 days later the ISP technician finally came and solved the issue and I came back to working on it - which was only 4 days prior to posting this announcement.
However since then I came back to spending all of the free time I have available (which ranges from 2-4 hours on a weekday) on the update and it's looking promising, although significantly later than I expected to be done with it.
No ETA for now, but I'll give one as soon as things look more complete.
Sadly I wasn't able to organize events for the anniversary due to the issue I previously mentioned. We will compensate with events when the major update commences.

v84 will have a Tespia as it's not your usual update but a major one. Applications for v84 Tespia will open after internal testing is done and we're aiming for 20 slots.

And that's it for now!
Feel free to ask any questions regarding anything posted here.

Here's to another amazing year of operating the Windia services.
Thanks everyone for sticking with us throughout the good and the bad times. Love you.

Thanks so much for the hard work and a lot of time you have devoted to Windia!

Thanks so much for the hard work and a lot of time you have devoted to Windia!

This server has helped people make friends and build communities. It has offered enjoyment during a time when all is crazy in the world. This server has helped me learn a few life lessons about persistence, delayed gratification, and the perspective of others. It has even sparked my desire to get back into programming.

When I first started on this server with a friend, this is the first thing we messaged about:

Reed - It's weird to see a server where the admins are actually active- lmao.
Skidaddle - yeah, threw me off
Click to expand...

Maplestory private servers aren't a unique concept, but the server that you've built here is.
You have put in the effort, and it reflects in its success.

Thank you for all the good times, and here's to the hope of many more.
W

Looking forward to this! Thanks so much for your hard work Shavit, the entire windia community, Violet especially, appreciates you

Head of my body

Moderator
I only came upon windia after I got banned from MapleMS and got hooked instantly. It gave me hours of enjoyment and made me neglect too many things :/ I still blame windia for not winning a single tournament since joining. But I guess it only proved how fun it was. Apart from not winning any money from my tournaments, I ended up using even more money donating to windia . I’ve said it before and I’ll say it again, Windia is the only server I’ve ever donated to and it was purely to support the server and I have not regretted a single cent used, even if I gave much of the credits away.

Everything about the server is great, from the constant development, to the GMs to the community to our beautiful lord and savior shavit. I can honestly say I love this server with all my heart and is the reason why I even applied to be a GM (Apart from infiltrating the admin team to cause chaos and destroy windia from the inside).

But for reals, I’m very grateful to shavit for creating and maintaining windia, it really did helped me through some tough times. So from the bottom of my heart, thank you shavit <3 Please stay well and don’t overwork yourself over windia!