I think this is an angry and sad child who decided to become super petty to the world after being perm banned from an online game resulting from HACKING.
This is the type of child who would go and become a cop in the real world just so they could find you and bully you in society.

A simple search will show you this person has a history of hacking and being banned from online games, etc.
Refer to pic

This is just simple psychology. Upset that they wasted almost one year of their life playing? or hacking? just to result in a ban. Alongside with the futile attempts to appeal the ban, and being ignored they became SOUR and ANGRY as the appeal was a total fiasco they looked more and more pathetic sending responses that were met with no reply.

So one day woke up decided to run a Private Maple Server to micromanage people and have that "power" because they want people to go through exactly what they been though. Admin don't care about no appeal, just care for you to look as stupid as they did.

"windia sysadmin/developer
please, do not message me regarding ban appeals."

Server is operated and run by a cyber bully, petty, and sad child. Oh yeah most importantly a Hypocrite too.

We give it an estimate of about one year. Good luck all.

Moderator
Just to clarify we are pretty lenient on hackers here. I'm not sure where you got your information but hackers help us develop a stronger anticheat. If they are reasonable people and don't have malicious intent to damage the IP or individuals they are usually let off if they come clean.

At this point all ban appeal decisions are exclusively made by the GM team aside from charge backs.

We also don't take private ban appeals hence the memo on some of our staffs bios. if you want to appeal a ban post it publicly and maybe put some actual effort into it.

Judging from the sentiment of this post I am going to guess you were unable to follow the Windia ToS. I am guessing most likely unwilling to own up to it. A quick scan through the approved ban appeals would show that is all we ask.

Administrator
I honestly don't know what even went in your mind when you wrote this thread. I was 13 years old when I got banned in that game, in fact I'm unbanned from there since a very long time ago now. I also met Nekomaki on that game and if it wasn't for me getting banned there, there's a good chance Windia wouldn't even exist at all -- just saying.

It's no secret that I'm an expert when it comes to cheat development in games. There's a reason Windia is the only server online right now with a proper anti-cheat while staying non-intrusive, doesn't take too long to realize why.

I'm not hiding anything, unlike a lot of private server admins I've been using the same online alias I've been going by for over 10 years now.

Regarding the bans you're talking about - that is simply untrue. Cheaters get unbanned unless they're repeat offenders (as long as they're willing to be honest and provide information about their malicious acts), and macro users get a second chance, again, only if they're willing to admit their mistakes. If they're not willing to admit what they did wrong, they will probably end up being repeat offenders.
I wrote an announcement over a year ago explaining that botting ban appeals are only removed on the person-level (as in, your convicted account stays banned but you're allowed to create a new one without being banned for ban evasion). My explanation was that botters end up generating a lot of in-game goods and currencies into Windia's economy. In the early days of Windia, it was crucial and we had to do something about it. Nowadays, most of the end-game currency/items are considered untradable and we are planning to rework the ban appeal system in the near future.

Windia is actively moderated. We don't ignore anyone, not even in private messages. Anyone who ever tried to DM me on Discord knows that.

Other than that, @Wolf said pretty much everything I could.

By the way, OP indeed got banned for farming with macros - 6 days ago: 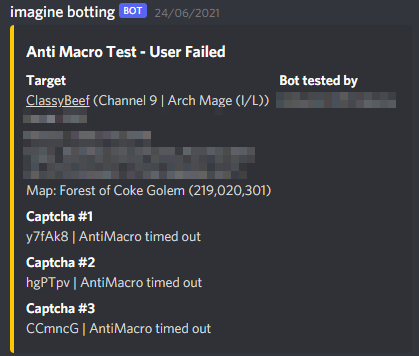 IGNwarrior said:
We give it an estimate of about one year.
Click to expand...